It is 4 p.m on New Years Eve, the house is quite for the first time since before Thanksgiving.
I am home alone.
And I love it.
What should I do?
I need to mop the kitchen....
I need to clean my scrap space....
I need to ........Listen to only the pecking of the keys of the computer.
I need to listen to the lovely silence.
I want to wish each one of you silence when you need it,
noise when you want it,
and inspiration for the new year.
Start the new year off with a scrapbook page.
My idea is to....Document time tonight. Starting at 5 p.m till midnight.
Take pictures if you want, or just document the next 7 hours.
The 7 hours leading into 2007.
Can't wait to see your pages.
Posted by Jerri junque at 2:25 PM No comments:

It is all over, except the packing up.
Tree went out on Tuesday to make room for the 6 foot ball pit that "SANTA" brought.
Next time read the package for size, okay.
Ham still in the fridge, a few Christmas cookies and we didn't even bother to make Christmas fudge this year.
I went to find the perfect pair of black slacks on Tuesday afternoon.
Oh my goodness, I refused to pay $47.00 for them.
So I went to Cato and got 2 shirts and the perfect pair of black slacks for $47.00.
Back to work on Wednesday, with all my new scrapbooking goodies.
Not too busy, so I got to red new books and play with my new stuff.
Still have one more "HOLIDAY" party tonight.
No gift, No pressure, just good fellowship.
The few day between Christmas and New Years seem so slow paced.
Kinda nice for a change.
Enjoy your week.
Posted by Jerri junque at 5:50 AM No comments: 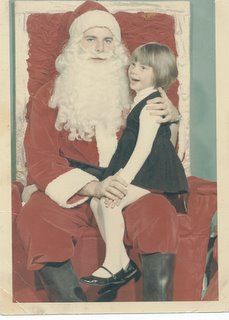 Santa,
This is the time of year that I would like to see and talk to each and everyone of my friends. But it seems like every year the season gets more and more hurried and events fill my days. So I would like to wish everyone of you a special Holiday Wish.
So from Santa's lap,
I wish you a Very Merry Christmas,
and the Happiest of New Year.
Posted by Jerri junque at 5:37 AM 1 comment: 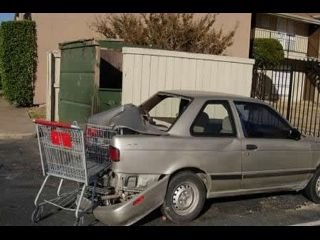 Anyone who knows me, knows my pet peeve is- people who leaves their shopping cart in the parking lot. Well, on Sunday afternoon I took my sister to Wal-mart. I know this was insane, one week till Christmas, Sunday afternoon, and a pretty day. We knew it was going to be a mad house and was not in any hurry and I was calm until.......
I checked out and went to my car. I unloaded my packages and then saw 2 buggies up against my car. (lets keep count here, with mine this makes 3) So I start to put them together to walk them to the holding pin. Which by the way was only about 4 cars up from where we were parked. ( this is where it could have gotten nasty) A couple parked next to me each had a buggy. And the lady pushed her empty buggy and propped it on the car in front of us. I walked over got her cart also and added it to mine, You know what I was thinking, but not saying a word. The husband then said, if you are going to take them, here I will donate mine. I said, " I just don't want them to hit my car or anyone else's. He got into his car. As you can guess I was steaming by this time. And I was trying to push 5 buggies to the holding pen. Well, picture this.... They started to come apart - A car pulled up to take the couples parking place, blinker on, and waiting, I am still struggling with 5 carts. The couple said something to each other and then laughed. I allowed them to pull out and the other car to pull in. Still struggling, I took 2 at a time until I got them in the holding pen. How was your Sunday?
Posted by Jerri junque at 4:54 AM 2 comments:

Well, I found this on another blog and had to show you. Ten days till Christmas, I could use a laugh. Let me know what your name is:
What's in a name?

5. Your Soap Opera Name (middle name, city where you were born): Lynn Birmingham

8. Nascar Name (the first names of your grandfathers): Matthew Garnett 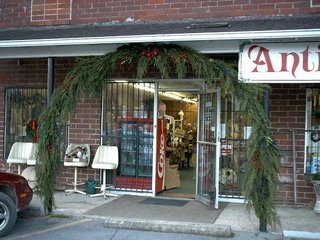 I had a "real" day off yesterday. I went to the dentist and then home. Took a nap, done some laundry and vacuumed. I loved it. I didn't worry that I only have one more Monday off before Christmas and still need to go Christmas shopping. I hate shopping on the weekend with everyone else. The crowds have been terrible in Trussville, I hear. So I will have a marathon shopping day next Monday. Look out if you live in this area. haha

This is a photo of the decorations I came up with for the shop, this year. Inexpensive, and it makes a big statement. Hubby helped wire it all together and climb the ladder. I bought fake berries, 4 apple sprays and Eugulipus. ( I love the smell)

Posted by Jerri junque at 6:16 AM No comments:

jerri's jubilee
We had a spectacular time Saturday afternoon. And as I seem to always do, I planned tooo much for the 4 hours we had schuduled. I always want everyone to get their $ worth, and seen to plan way too much. As promised, below are pictures of item you might not have finished.
If you have any questions, please e-mail me. 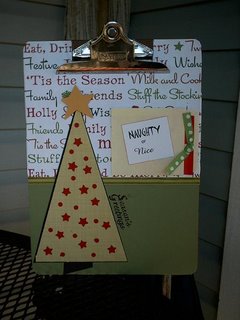 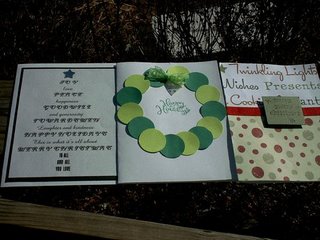 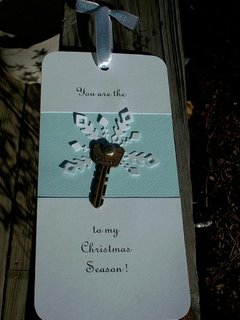 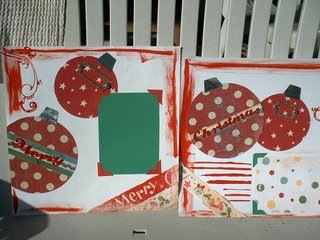 Jerri's Jubilee
Well, today is my jubilee, and I am not stressed. Seems funny, I am always stressed before an event. It is not a good thing, as Martha would say. And I have had some stress this week, on another family note. Today is a new day, a jubilee day. As it turns out we will be completing over 20 different item to take home. I even had to drop two items that I don't think we will have time to complete. I had Malik glittering name plates yesterday, everyone has been in on this one. Hubby went out and got dinner, while I prepared snacks last night. This is going to be a fun-filled afternoon. I have the 2-page layout all bagged up to take home just in case we don't have time. It has been so much fun coming up with the ideas. Well, if you will be joining me today, I welcome you, get ready to have fun..... But if you are not for what ever reason, maybe next year. Maybe I will take a few pictures....have a good day.
Posted by Jerri junque at 5:13 AM No comments: 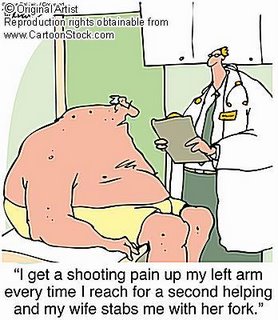 Someone sent this to me, and I had to pass it along.

1. Avoid carrot sticks. Anyone who puts carrots on a holiday buffet table knows nothing of the Christmas spirit. In fact, if you see carrots, leave immediately. Go next door, where they're serving rum balls.

2. Drink as much eggnog as you can. And quickly. It's rare. You can't find it any other time of year but now. So drink up! Who cares that it has 10,000 calories in every sip? It's not as if you're going to turn into an eggnog-alcoholic or something. It's a treat. Enjoy it. Have one for me. Have two. It's later than you think. It's Christmas!

3. If something comes with gravy, use it. That's the whole point of gravy. Gravy does not stand alone. Pour it on. Make a volcano out of your mashed potatoes. Fill it with gravy. Eat the volcano. Repeat.

4. As for mashed potatoes, always ask if they're made with skim milk or whole milk. If it's skim, pass. Why bother? It's like buying a sports car with an automatic transmission.

5. Do not have a snack before going to a party in an effort to control your eating. The whole point of going to a Christmas party is

to eat other people's food for free. Lots of it. Hello?

6. Under no circumstances should you exercise between now and New Year's. You can do that in January when you have nothing else to do. This is the time for long naps, which you'll need after circling the buffet table while carrying a 10-pound plate of food and that vat of eggnog.

7. If you come across something really good at a buffet table, like frosted Christmas cookies in the shape and size of Santa, position yourself near them and don't budge. Have as many as you can before becoming the centre of attention. They're like a beautiful pair of shoes. If you leave them behind, you're never going to see them again.

8. Same for pies. Apple. Pumpkin. Mincemeat. Have a slice of each. Or if you don't like mincemeat, have two apples and one pumpkin. Always have three. When else do you get to have more than one dessert? Labor Day?

9. Did someone mention fruitcake? Granted, it's loaded with the mandatory celebratory calories, but avoid it at all cost. I mean, have some standards.

10. One final tip: If you don't feel terrible when you leave the party or get up from the table, you haven't been paying attention.

Re-read tips; start over, but hurry, January is just around the corner. Remember this motto to live by:

"Life should NOT be a journey to the grave with the intention of arriving safely in an attractive and well preserved body, but rather to skid in sideways, chocolate in one hand, body thoroughly used up, totally worn out and screaming "WOO HOO what a ride!"

Have a great holiday season!
Posted by Jerri junque at 4:39 AM 2 comments: 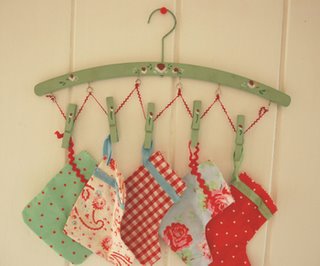 I really like this advent calendar, I found it on one of the many blogs I read. And I just so happen, have a wooden hanger, just like this one. We have been using the cookie sheet advent calendar I made a few years ago. But maybe it will be time for a change next year. Or who is to say I can't have two. On another note-
The Jubilee is full- thanks girls. Be prepared to have a wonderful time. I am finalizing projects this week. I know waiting until the last minute, is not good. But I have almost all finished. One is giving me a problem and I will be doing a lot of prep work, for it. Want to have plenty of time to get to them all. There is over 10, if you count each card, tag, bag and/or goodies. Oh well, off to take Malik to school.
Posted by Jerri junque at 5:00 AM 1 comment:

Only 1 spot left
for
Jerri's Jingling Jubilee
I am getting so excited about my first annual Jubilee.
I have woke up each morning this week, dreaming of the projects I need to complete.
Yesterday it was the tags and cards. They were completed yesterday.
This morning it is this wonderful snowflake ornt, we will re-create.
Make out of book paper.
Posted by Jerri junque at 4:42 AM 2 comments: 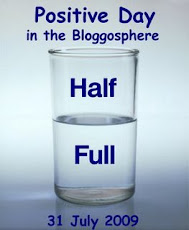